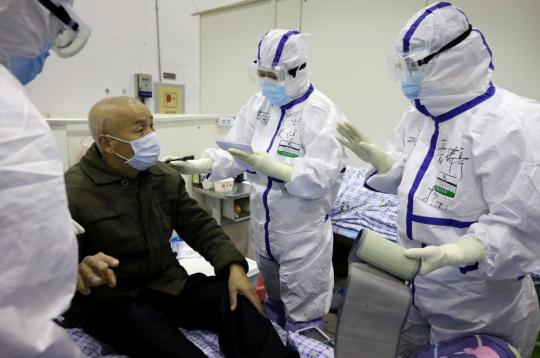 Medical staff check on patients as they exercise together in the "Wuhan Living" mobile cabin hospital in Wuhan, Central China's Hubei province, on Feb 15, 2020. [Photo by Zhu Xingxin/China Daily)

Hubei province, center of the novel coronavirus outbreak, reported 1,933 new confirmed cases of the virus and 100 new fatalities on Sunday, bringing the two numbers up to 58,182 and 1,696, respectively, according to the province's health commission.

A total of 4,826 suspected cases have been reported as of Sunday in the province, it said on Monday morning, adding that among them, 4,384 cases have been under centralized quarantine.

The province also reported 1,016 new recovery cases on the same day. By the end of Sunday, 6,639 patients in the province have been released from hospitals after recovery, said the commission.

A total of 40,814 people are still under medical treatment in the province, including 8,024 people with serious symptoms and 1,773 in critical condition, the commission said.

Health authorities in the province have traced 191,434 people with close contact with patients, with 71,613 of them still under medical observation, according to the commission.

As coronavirus spreads across the world and public health officials warn about more cases coming to the United States, emergency preparedness experts are urging Americans to stock up on supplies now so they can shelter

Beijing: Millions of Chinese have begun returning to work, raising public concerns over clusters of Covid-19 (novel coronavirus). Wu Zunyou, an epidemiologist at the Chinese Centre for Disease Control and Prevention, said at a news conference

BEIJING: Chinese health authority said it received reports of 2,009 new confirmed cases of Covid-19 (novel coronavirus) infection and 142 deaths from 31 provincial-level regions and the Xinjiang Production and Construction Corps. Among the deaths, 139

The Monterey County Health Department has said there is a possibility Camp Roberts in south Monterey County will be used to quarantine coronavirus patients from the Diamond Princess cruise ship in Japan.There no certainty at

During a week when the coronavirus threatened to become a pandemic that hammers global growth, with reportedly 6 % of the world population under quarantine, and probably more as China continues to adjust the reporting