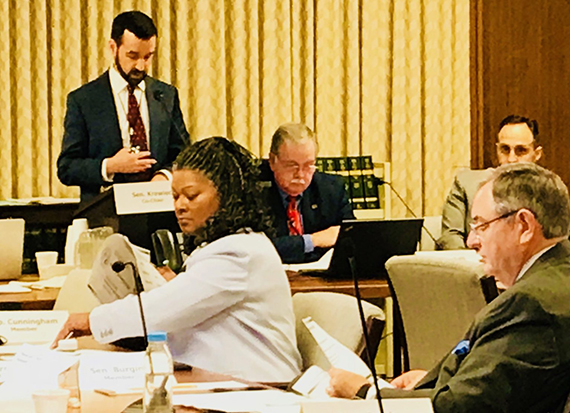 Even before news feeds were disseminating story after story on the coronavirus outbreak in China, North Carolina's state epidemiologist and others dedicated to protecting the public's health were in high gear.

Zack Moore, the state epidemiologist and a physician who has been with the North Carolina Division of Public Health since 2006, outlined some of the behind-the-scenes work that he and his colleagues have been doing during a meeting this week of the Joint Legislative Oversight Committee on Health and Human Services.

It's important to note that North Carolina has no reported cases of the virus, Moore told the lawmakers gathered. On that day, there only had been 13 cases reported in the United States, two of which were transmitted by person-to-person contact by people who knew each other.

By Thursday, another two cases had been reported in the U.S., the most recent being at Lackland Air Force Base in Texas, where the patient was under quarantine after being evacuated from China on a Feb. 7 chartered flight.
"Globally and in the U.S. and North Carolina, this really is a very rapidly evolving situation," Moore said.

Because of that, it was difficult to provide concrete answers for lawmakers who wanted to know, flat out: Is the coronavirus coming to North Carolina, and if so, had bad could it be?

"There are a lot of uncertainties so we need to acknowledge that we could end up with widespread transmission in North Carolina and across the country," Moore said in response to a question from Sen. Ralph Hise, a Republican from Spruce Pine. "We could end up with a situation more like SARS where we were able to contain it. ... It's certainly our plan to be prepared for a situation of widespread transmission so that we're not caught off guard if that does happen."

They are planning for the worst and hoping it's all for naught.

WHO gives official name
Coronaviruses are a large family of viruses transmitted between animals and humans that can cause illnesses ranging in symptom severity from little more than a common cold to the more extreme problems associated with MERS, or the Middle East Respiratory Syndrome, and SARS, or the Severe Acute Respiratory Syndrome.

Only two people tested positive for MERS in the U.S., according to the CDC, and though there were more SARS cases, 115 from 29 states, that disease was quickly contained with no deaths being reported from either outbreak in this country.

The newest coronavirus was detected late last year in Wuhan City in China's Hubei Province. The genome sequence shows it to be a betacoronavirus, which according to the Centers for Disease Control and Prevention, has its origins in bats, similar to MERS and SARS.

Early on, many of the patients in the outbreak area had some contact with a large animal and live seafood market, raising the possibility that it was being spread to people from an animal. But as the disease became more prevalent, virus trackers noted that more and more patients had no exposure to animal markets, leading them to believe it was moving from person to person.

Of the 15 cases detected in this country, the CDC has seen the virus spread among returned travelers, but not into the larger community.
California has the bulk of the cases confirmed in this country, with eight as of Thursday. Illinois has two and Arizona, Massachusetts, Texas, Washington and Wisconsin each have one.

Knitting together networks
The three new cases in this country came in the same week that Gov. Roy Cooper created a task force to "monitor, prepare for and respond" to the potential for an outbreak in this state.

"Though currently the risk to North Carolinians is low, we are taking a proactive approach and are prepared for potential scenarios," Cooper said in a statement. "This task force will continue coordination between our agencies and federal partners so we can keep the public informed and safe."

The announcement of the task force also came in the same week the World Health Organization gave the illness the official name of COVID-19, which Tedros Adhanom Ghebreyesus, the organization's director-general, noted on Twitter could "not refer to a geographical location, an animal, an individual or group of people." It also had to be easy to pronounce, according to his tweets.

Providing an official name not only creates a uniform reporting of the virus, but it also casts aside the potential for a stigmatizing name to develop against a certain region or specific animal.

Dr. Elizabeth Cuervo Tilson, the state health director and chief medical officer for the Department of Health and Human Services, is leading the task force with Mike Sprayberry, the state's director of emergency management.

Tilson already has issued a temporary order that requires all physicians and labs to report suspected cases to the state. That way, the state can help isolate the patient while testing continues to determine whether it truly is a case.

Moore and others at the state level have been working with local health departments to coordinate information sharing, which is not uncommon.

They also are in regular contact with the CDC and other state epidemiologists to keep the lines of communication as open as possible.

Funneling travelers into U.S.
This can mean long days and short nights, particularly for epidemiologists and lab workers near any of the 11 U.S. airports chosen as the sites for any U.S. citizens returning from China. On Jan. 31, as TV screens and social media feeds ramped up fear about a virus with many unknowns, the Trump administration issued an order limiting any travel into this country from China to U.S. citizens and Chinese nationals who are immediate family to or spouses of U.S. citizens.

At the airports, Moore explained, the travelers are screened for symptoms and if they show any they are isolated immediately. If not, they are self-monitoring at home, usually with public health workers checking in daily, or more, for 14 days.

If any of those travelers experience symptoms over the next 14 days, they're asked to call public health officials before seeking treatment so the health care providers can ensure isolation and prepare against any person-to-person spread during examination and testing.

In an effort to keep perspective on the COVID-19, public health officials continue to point out that influenza is much more prevalent in this country and state. North Carolina has had 75 laboratory confirmed flu deaths this season, with nine new deaths confirmed last week, according to DHHS data.

That comparison brought a question from Rep. Donny Lambeth, a Winston-Salem Republican at the Joint Legislative Oversight Committee.

"Is this similar to the flu in which it has a seasonal component?" the lawmaker asked, noting the lower number of cases in late spring, summer and early fall.

"That is definitely the case of most of the coronaviruses we see," said Moore. "We expect this one might have a seasonality to it."

SINGAPORE - Despite 81 per cent of Singaporean residents fearing coronavirus infection, nearly 35 per cent said they would continue to attend an important event even if they had developed mild symptoms earlier that day. These

As the Chinese city of Wuhan, the epicentre of the new coronavirus becomes the latest urban centre to face a deadly disease outbreak, city planners and physicians say such densely packed hubs

Coronavirus has so far infected more than 60,000 people worldwide and claimed the lives of over 1,400 in China-surpassing the toll from the SARS outbreak of 2002-2003. The World Health Organisation (WHO) has officially declared